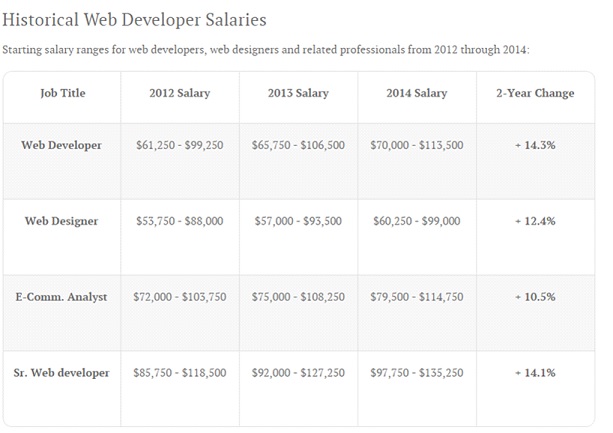 Web development is one of the fastest growing and most in-demand occupations to date, and with no sign that this train will halt anytime soon, there’s no better time for new up-and-comers to get into the field!

As our modern society moves deeper and deeper into the digital age, fewer of the standard offline methods of doing things will remain the norm, while instead these methods transition into their more streamlined online counterparts. According to the U.S. Bureau of Labor Statistics (BLS), employment of web developers is projected to increase 20 percent within the decade between 2012 and 2022, nearly doubling the growth of all other occupations.

We can see here that in the past two years alone there has been a huge spike in web developer salaries given tech industry’s demand to find talent.

The expansion is largely based on the ever-increasing drive towards eCommerce, as online purchasing is expected to grow faster than the on-site retail industry.

An overwhelming surge of mobile device usage is also largely a cause of this projected growth, with a great deal of both new and existing websites requiring designs and development that support a mobile platform. In fact, according to the 2015 Internet Trends report, which is published annually by the venture capital firm Kleiner Perkins Caufield & Byers, mobile device usage for digital media consumption has handily surpassed that of traditional desktop platforms with no signs of slowing.

Perhaps just as critical to those looking to get their feet wet in the field of web development is the pay: How does a web developer salary match up to similar occupations?

According to the U.S. Bureau of Labor Statistics, the median annual wage in the U.S. for a web developer in May 2012 was $62,500, which is roughly middle of the pack for similar computer-related occupations, and well above the median across all occupations at $34,750. As mentioned above, even since 2012 we’ve seen a significant spike in web developer salaries based on employer demand.

Make this a super compact version of what you wrote on your "about us" page--your best introduction to a prospective client.